Give Credit to Coconuts 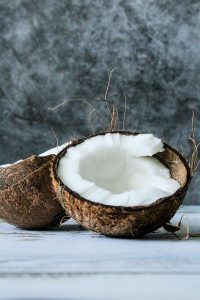 Consumers have become well aware of the coconut, or the scientific name Cocos nucifera, because of its numerous benefits to the human body.  The early Spanish explorers called the nut “Coco”, which means, “monkey face” because of the three indentations and the “hairy” skin of the coconut that resembles the head and face of a monkey. Nucifera means “nut-bearing.” The coconut provides a nutritious source of meat, juice, milk, and oil that has fed and nourished populations around the world for generations.

On many Pacific islands, coconut is a large part of the diet. Nearly one-third of the world’s population depends on coconut to some degree for their food and their economy. For many cultures, the coconut has a long and respected history. Coconut oil is of special interest because it possesses healing properties far beyond that of any other dietary oil and is extensively used in traditional medicine in the Pacific populations. Pacific Islanders consider coconut oil to be the cure for many illnesses. The coconut palm is so highly valued in this region that some consider it “The Tree of Life.” Only recently has western medical science looked into the medicinal benefits of coconut oil.

Coconut was once thought to be unhealthy because of its high saturated fat content. It is now known that the fat in coconut oil is different from most all other fats and possesses many health benefits.  These benefits include skin and hair care, stress relief, cardiovascular health, weight loss, increased immunity, upper respiratory infections, and urinary tract infections. Other benefits of coconut oil include the treatment of influenza symptoms, stomach digestion, diabetes, cancer, irritable bowel syndrome (IBS), regular dental care, bruises, constipation, stomach ulcers, Crohn’s disease, and chronic fatigue syndrome.  Coconut oil is also effective on fungi and yeast that cause candidiasis, ringworm, athlete’s foot, thrush, and diaper rash.

The medicinal benefits of coconut oil can be attributed to the presence of Lauric acid, Capric acid and Caprylic acid, with its antimicrobial, antioxidant, antifungal, and antibacterial properties.  Specifically, the human body converts Lauric acid into Monolaurin, which is claimed to help kill viruses and bacteria that cause diseases.  Coconut oil is often preferred by athletes and bodybuilders and by those who are dieting. The reason behind this is that coconut oil contains fewer calories than other oils while providing a nutritional source of energy.  The content of coconut oil is easily converted into energy and does not lead to the accumulation of fat in the heart and arteries.

Coconut oil does not form harmful by-products when heated in normal cooking temperatures, unlike other vegetable oils.  The oil is completely non-toxic to humans.  Even though there are many health benefits to using coconut oil, some people are allergic to coconuts and should consult with their health care professional prior to consumption.