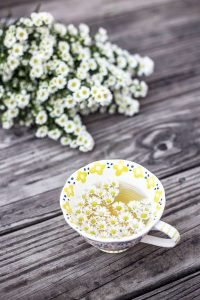 Chamomile or the Latin name, Matricaria recutita, is an ancient medicinal plant that was well-known throughout Egypt, Greece and Rome.  Common names for chamomile include German or Hungarian chamomile, Bodegold chamomile, true chamomile, sweet false chamomile and wild chamomile.  Chamomile is the national flower of Russia. It looks like a daisy and has been used throughout history for numerous medical ailments. In the Middle Ages, people used this plant for asthma, colic, fevers, inflammation, nausea, nervous ailments, skin disorders, children’s ailments, sleep aids and cancer.

There are other ways to use this amazing plant besides for medical purposes. In the United States and Europe, chamomile has widespread use as a refreshing tea and as an ingredient in cosmetics, and other external preparations including salves, ointments and vapor rubs. The Herb Research Foundation in Boulder, Colorado estimates that over one million cups of chamomile tea are consumed worldwide each day, which could make it the most widely consumed herbal tea. Chamomile is a popular herb and it can be found as a drug in the pharmacopeia of many different countries.

The National Institute of Health lists over 100 specific ailments and conditions that chamomile has traditionally been used for.  Recent research has shown that chamomile has specific anti-inflammatory properties, anti-bacterial properties, anti-allergenic properties and sedative properties. Other scientific research confirms traditional uses for the plant include as an effective antispasmodic, anti-septic, stomachic, antipyretic and anti-fungal.  Recent studies have focused on the ability of chamomile to help fight infection and inflammation. One study reported that chamomile helps antibiotics work better specifically when treating bladder infections.  Another test showed that chamomile was superior to hydrocortisone for easing skin inflammation.  Specifically, chamomile maybe used for the following circumstances:

Chamomile is related to ragweed, and people allergic to ragweed should steer clear of this herb.  People taking blood thinners should also avoid chamomile, because it contains coumarin, a substance that thins the blood and may enhance the effects of blood thinners if taken in a large quantity.

After a long day of work, to help you unwind, why not brew up a cup of chamomile tea? Enjoy and relax!