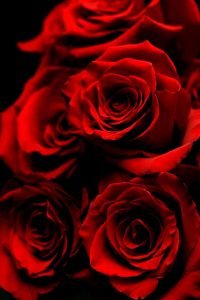 As Valentine’s Day approaches, many are thinking of the magic of the day and our thoughts turn to friendship and love.  Traditionally, gifts are exchanged with that special someone including chocolates, flowers or a candlelight dinner.  There are some well-known herbs that have been used to celebrate the magic of the day and are associated with romance and love. In history as well as legend, some herbs were used as charms of devotion, in love rituals, magic potions or written about in poetry.

Rosemary: Rosemary is an herb that has a long history dating back centuries.  Rosemary was frequently used as a head dress for special celebrations including weddings and other occasions of love and commitment.  In culinary terms, Rosemary was used in cooking to bind two people together in peaceful love and harmony.  In herbal folklore, rosemary symbolizes remembrance.

Basil: Basil is a strong, fragrant herb that is used frequently in Mediterranean and Indian cooking.  It works together with many other flavors and plants especially tomatoes. Basil has a variety of flavors and colors that range from deep purple to green. In Italian folklore, single women wore basil and if a single man accepts the basil plant from a woman, they would fall in love.  Basil was used in many love spells and love potions.

Rose: The rose is the queen of flowers.  No other flower has been written about as much in love songs, poems, and folklore as the rose.  In literature throughout history, you will find many references to the rose in Shakespeare’s sonnets, Greek mythology and the Bible.  The rose is considered the universal symbol of love throughout the world.

Lavender: In the past, lavender flowers were burned to attract the opposite sex.  Lavender is a calming plant that was used to symbolize devotion and undying love.

Calendula: According to folklore, calendula symbolizes joy and also wards off evil spirits and thoughts.

Other notable mentions are cardamom, cinnamon, dill and honeysuckle.  Cardamom and cinnamon were said to inspire passion and wild recklessness.  Cinnamon sticks were burned to speed up a love affair.  Dill was sprinkled around the home to protect and strengthen existing love.  Honeysuckle, whose sweet scent permeates under the moonlight, is a climbing vine that resembles two lovers intertwined.  Drinking honeysuckle tea is supposed to inspire dreams of love and passion.

So as this Valentine’s Day approaches, remember the magic of these top romantic herbs and how you may share your affection with your loved ones.