The Complexity of Chocolate 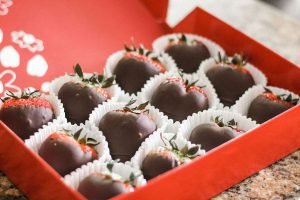 February is the time of the year that is noted for Valentine’s Day.  This celebrated holiday is famous for the amount of chocolate that is bought and consumed. On Valentine’s Day, you will find everything from chocolate dipped strawberries to boxes of gourmet chocolates.  With all of this consumption of chocolate, one may think…Where does chocolate come from? Are there any health benefits from the cacao bean?  What is the difference between cocoa from the cocoa tree and chocolate?

Plants and herbs have been used for medicinal purposes for thousands of years.  One of the most abundant sources of medicinal plants comes from the Amazon rainforest.  It has been speculated that the rainforest may contain more than two-thirds of the Earth’s vegetation.  Included in this vegetation is the cocoa tree.

Theobroma cacao or cocoa tree grows approximately 15 to 26 feet tall.  The cocoa tree thrives in the rainforests because it needs a warm, humid, tropical climate and at least 80 inches of rain annually. The fruit, seeds, bark and leaves of the cocoa tree have medicinal uses including treating ailments such as cough, headaches, eczema and burns.  It also contains a significant level of antioxidants to support cognitive function and prevent oxidative stress.  The seeds of the cocoa tree are the main ingredient to make cocoa powder, then chocolate.  The seed also contains a significant amount of fat, cocoa butter. The most active ingredient is theobromine, which is a compound similar to caffeine.  The scientific name Theobroma means “food of the gods”.

Christopher Columbus was one of the first Europeans to encounter cocoa and it was one of the treasurers that he took back to Spain from the New World. Cortez, while in Mexico realized its significance after he saw it transformed into liquid chocolate and served to the Emperor Montezuma. In the 1800s, the Swiss added milk to the liquid chocolate and developed a more mild-tasting formula.

Today, harvested cacao pods are split open and the wet beans are removed, fermented and then dried to develop the rich cocoa flavor. The beans are transported to the cocoa processing factories, where they are cleaned, roasted and ground to produce a cocoa mass. The cocoa mass is pressed to extract cocoa butter, resulting in a solid block of cocoa, which is ground into powder. Solid chocolate is produced from cocoa mass, cocoa butter and sugar for dark chocolate; milk solids and milk fat are added to the mixture to make milk chocolate.

There are three main varieties of cocoa: Criollo, Forastero and Trinitario.  The most prized and expensive cocoa is Criollo.  Criollo is considered to be the “prince of cocoa” and has a reputation for its fineness and intense aroma. This variety represents only 5% to 10% of chocolate’s global production, in part due to its vulnerability to insects and disease. It is reserved for use in only the very finest chocolates. The Forastero variety is very diverse and more resistant to disease and pests. It is more fruitful than the Criollo variety.  The Forastero cacao bean accounts for 80% of the chocolate in production. Trinitario, a hybrid of Criollo and Forastero, is used in about 10% of chocolate. Trinitario cocoa varies between average and superior chocolate and has strong cocoa butter content.

So as one enjoys that chocolate-covered strawberry or heart-shaped confection this Valentine’s Day, we can think about all that goes into that box of chocolates, as well as its long and favorable history!