Boost Your Immune System with Elderberry 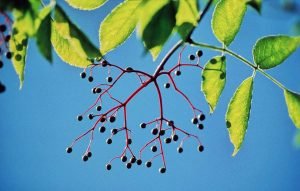 Sambucus nigra, or the common name Elderberry, has an interesting history and has been used for many purposes.  It is common to hear the name Elderberry, particularly this time of year when we are researching ways to boost our immune system and ward off any colds that may come our way.

You may find that elderberry is a common ingredient in several foods.  The flowers of Sambucus nigra are used to produce elderflower cordials.  Elderberry syrup is used for many different purposes in Europe.  It’s a popular topping to pancakes instead of blueberry or strawberry and can also be diluted with water to make a beverage.  Wines, soda pop, sweet desserts, and marmalade have also been made from these delicious berries.  Elderberries have been grown for their ornamental purposes as well and used in flower arrangements and seasonal holiday foliage. One has to be careful with the leaves, twigs, branches, seeds and roots of this plant as they are toxic and can cause a build-up of cyanide in the body.

Historically, folklore has mentioned the elderberry to ward off evil influences and provide protection from witches.  If an elder tree was cut down, a spirit known as the Elder Mother would be released and take her revenge on the person cutting down the tree.  In more recent story-telling, elderberry gained popularity in the movie Harry Potter.  Harry Potter’s wand was made of Sambucus and known as the “Elder Wand”.

Medicinal uses of elderberry are widespread.  Hippocrates referred to this plant as the “medicine chest” and research has proven this to be true.  Classical Greek healers considered the elderberry as one of the best healing plants on the earth. Elderberries were listed in the CRC Handbook of Medicinal Herbs as early as 1985, and listed in the 2000 Mosby’s Nursing Drug Reference for colds, flu, yeast infections, nasal and chest congestion, and hay fever.  One of the major benefits of elderberry include its immune-boosting properties. Its immune-boosting properties provide relief in common conditions such as colds, flu, coughs, congestion and tonsillitis. More specifically, elderberry juice was used to treat a flu epidemic in Panama in 1995.

In the Journal of Complementary and Alternative Medicine, it states that in a placebo-controlled, double-blind study, elderberry was shown to be effective for treating Influenza B with a faster recovery than those receiving the placebo.  Another study published in 2004 by Erling Thom at the University of Oslo in Norway, found that patients who were given elderberry extract (93%) were completely recovered from the flu in two days versus those taking the placebo, who recovered in six days.

Elderberry is currently being used for a host of variable conditions including cancer, AIDS, asthma, diabetes, and cardiovascular disease.  Elderberry juice has also been used to improve vision, especially night vision.  Other uses of elderberry include as a mild laxative, diuretic and for weight loss.

As the cold and flu season is upon us, we should have our bottle of elderberry extract ready. As always, please consult with your doctor before starting any kind of medical protocol.