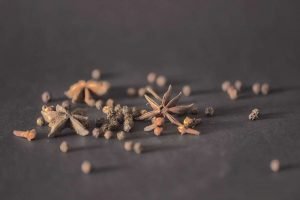 The holidays have begun with the festivities and cooking that go along with the season.  Also with the holidays, is the overindulgence of consuming too much food.  Family dinners have a wonderful variety of foods and baked goods, making it easy for everyone to overeat.  At the office, there are plenty of baked items this time of year as well.  A common ingredient in many of these seasonal foods and drinks is cloves.

Clove or the Latin name, Eugenia aromatic, and for clove oil, Eugenol, has been used for many, many years. Like the history of many spices, the history of cloves goes back many centuries.  In fact, this spice was one of the first to be traded. Cloves have long been used in foods, as a fragrance, flavoring agent, and antiseptic. Clove was a highly prized item in ancient times by the Romans and Chinese.  It was considered a luxury item by the Europeans whom smuggled the plants and seeds from their original locations.  As recently as 1972, there was a law in Zanzibar that those who were caught smuggling clove seeds or plants would be punished by death. Currently, cloves are grown in Indonesia, Sri Lanka, Madagascar, Tanzania, and Brazil.

Cloves are commonly used for their culinary purposes including baked goods, soups, cheeses and tea. Whole cloves are often used in hams. Cloves can also be added to spice mixtures such as curry powders, mulling spices, and Worcestershire sauces.   Cloves are used with much popularity in North Africa and the Middle East, where they are generally used for meat dishes and occasionally rice dishes as well.  Cloves are also important for their fragrance.  In many Asian cultures, clove is commonly used in the production of perfumes.  During the holidays, it is a tradition in some European countries to make pomanders from cloves and oranges to place around the house. The clove scent permeates through the house and serves as a holiday decoration.

Medicinally, cloves have been used in dental care, so you may see it added to mouthwashes and toothpaste ingredients.  It has also been used in dental pain treatment. Clove oil specifically, has been used since ancient times to freshen breath.  Even today, dentists rub the main constituent of clove oil, onto gums because it’s naturally anesthetic and antibacterial.   Other medicinal uses of clove include use as an antifungal, fever reducer, and as a mosquito repellant.  Also worth mentioning, clove has been used to treat acute tension headaches, ringworm, and diarrhea. Recent research has found it to be effective against superbug staphylococcus when combined with eucalyptus, lemon, thyme, tea tree and alcohol.  Because of its antiseptic properties, clove can also help with common colds, flu, and bronchial congestion.

As you are consuming those holiday treats, don’t forget that cloves not only make your goodies flavorful, but they also may be good for you.