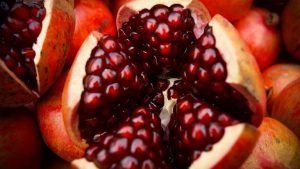 The pomegranate has received much attention in the healthcare field due to its many medicinal benefits.  Currently, the National Institute of Health has 20 research trials examining the effects of pomegranate extracts or juice consumption on chronic diseases such as cancer and cardiovascular disease. What is this medical wonder? Is it a true health remedy or a just a passing fad?  Claims are circulating that this medicinal wonder is effective against everything from Alzheimer’s disease to osteoarthritis. The Centers for Disease Control honored the pomegranate as one of its official fruit of the month.

The pomegranate is a shrub or small tree that is native to the region of Persia and the Himalayan ranges of India. This shrub has been grown since ancient times. There are approximately 760 different local varieties of pomegranate that have been officially recognized in Iran.  The name “pomegranate” is derived from the Latin name meaning pomum (“apple”) and granatus (“seeded”). It has been used for centuries as a popular drink in Persian and Indian cuisine. Pomegranate juice can be used as salad dressing, meat marinade, made into relish, dips and wine and even as a natural dye.

The Ayurveda system of medicine has used pomegranate as a source in traditional remedies for thousands of years. The rind of the fruit and the bark of its tree are used to treat diarrhea, dysentery and intestinal parasites. The seeds and juices are often used for the heart, throat, skin and eyes to prevent cataracts. Roman literature mentions the pomegranate as an effective medicinal plant against diarrhea and tapeworms.  In 1964, researchers conducted the first study on pomegranate.  It was another 20 years before the second study was published.  It is only recently that modern science has accelerated its interest in the health benefits of pomegranates. In 2004, there were 20 published studies. Today, there are over 400 studies on the benefits of pomegranates to human health.

Pomegranates contain a compound called Punicic acid, which is a fatty acid found in the oil of pomegranate seeds. Punicic acid is known to inhibit the effects of certain inflammatory compounds in the body.  Pomegranate has more phytoestrogen (estrogen from plants) than any other botanical source. These weaker plant estrogens block the effects of more powerful human-produced estrogens by fitting into the cell receptor sites for estrogen.

The pomegranate is also a good source of vitamins A, B, C, E, K; mineral Potassium, and Flavanols.  Pomegranates are mainly being marketed in the United States for its major source of antioxidants, which are protective against cardiovascular disease, diabetes and various forms of cancer including prostate, lymphoma and breast cancer. It is something to consider the next time you walk past the pomegranates in the produce aisle.