Cinnamon – The Spice of Life 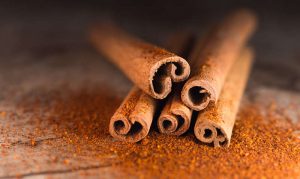 Available throughout the year, cinnamon is a fragrant, sweet and warm tasting spice has been used for centuries. It is the brown bark of the cinnamon tree, which makes the cinnamon available in its dried tubular form, known as a quill, or as a ground powder.

Cinnamon has a long history of being used as both a spice and a medicine.  It is mentioned in the Bible and was commonly used in ancient Egypt as an embalming agent.  Literature also mentions the ancient Greeks and Romans using this spice and it was so highly treasured that many considered it more valuable than gold!  Also worth mentioning, one of the earliest books on Chinese botanical medicine indicates the many benefits of cinnamon.  Cinnamon’s popularity has continued throughout history and was believed in ancient times to cure snake bites, freckles, kidney problems, and common respiratory ailments including cough. It was also thought to cure the winter blues including depression, irritability and to improve mood.  It became one of the most relied upon spices in Medieval Europe.  Due to its high demand, cinnamon became one of the first commodities traded regularly between the Near East and Europe.

Cinnamon is a spice that comes from the branches of trees that belong to the genus “Cinnamomum” and are native to the Caribbean, South America, and Southeast Asia. There are different types of species of cinnamon:

As a food, cinnamon has a long list of uses including many baked items such as sweets and pastries, beverages and alcohol, savory dishes and as a preservative to proteins including fish, soups and stews.

Modern research is showing that cinnamon might be the spice of life in many medical conditions.  According to the United States National Library of Medicine, cinnamon has been used to treat the following conditions: muscle spasms, vomiting, diarrhea, common upper respiratory ailments, loss of appetite and erectile dysfunction.  The National Institute of Health states that cinnamon has a chemical compound that can be used to fight fungal and bacterial infections.  Other research has shown promise of cinnamon for preventing Alzheimer’s disease (Tel Aviv University study) and according to a study done by a neurological scientist at Rush University Medical Center, cinnamon may help eliminate or stop some of the destructive processes of multiple sclerosis.  Other uses of this spice include controlling PMS, as a weight reducer, and as an insect repellant.  In massage therapy, cinnamon has been used to relax the muscles.  Cinnamon may also treat IBS (irritable bowel syndrome), arthritis, candida and yeast infections.  Seasoning a high carbohydrate food with cinnamon can help lessen its impact on your blood sugar levels.  Cinnamon slows the rate at which the stomach empties after meals, thus reducing the rise in blood sugar after eating (American Journal of Clinical Nutrition 2007 Jun; 85(6):1552-6).

This summer when you are enjoying that piece of apple pie, sprinkle on some cinnamon!  It is not only good for you but also tastes wonderful.