Astaxanthin: The King of Antioxidants 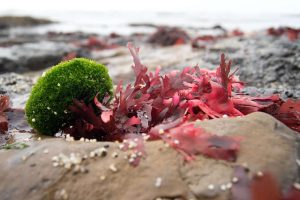 Astaxanthin is a naturally occurring carotenoid found in nature, primarily in marine organisms such as microalgae, salmon, trout, krill, shrimp, and other shellfish.  Carotenoids are considered antioxidants because of their ability to fight the aging process and various diseases.  Astaxanthin is considered the “king of antioxidants” and various scientific research developments have proven this prestigious claim.  The global astaxanthin market was estimated at $250 million in 2010, most of which is used as a pigment to enhance the pink color in farm-raised salmon, and shrimp.

Wild salmon are 400 percent higher in astaxanthin than farmed salmon.  Plus, wild salmon have much higher levels of omega-3 fatty acids than the farmed version. Even if you are able to purchase wild salmon, there is the problem with high levels of mercury and other unwanted toxins in the fish.  Plus, organic wild salmon is going to cost you at the cash register.

One of the most well-known benefits of astaxanthin is its ability to enhance athletic performance. Whether you are a professional athlete, or interested in increasing your tolerance for mowing the lawn or gardening, this carotenoid can help.  Astaxanthin is the main reason salmon have the strength and endurance to swim up rivers and waterfalls for days on end.  Salmon diets are high in this pigment, which concentrates in their muscles making them one of the leaders of endurance in the animal kingdom.

Astaxanthin is a powerful natural anti-inflammatory and has been used to treat carpal tunnel syndrome and rheumatoid arthritis. Other therapeutic benefits include the application of astaxanthin directly to the skin to prevent sunburn, certain skin conditions and research is showing that it can prevent cancer.  Astaxanthin has been used to treat Alzheimer’s disease and Parkinson’s disease, gastrointestinal disorders, male infertility, asthma, autoimmune diseases, back pain, benign prostate hyperplasia, depression, menopause, premenstrual syndrome, and macular degeneration.

Astaxanthin has the ability to travel to every cell and organ in the human body making it an ideal candidate for stabilizing blood sugar, improving cardiovascular health, and boosting the immune system. It’s easy to see why it’s called “king of the antioxidants”.

To prevent possible drug interaction as with all herbs and supplements, consult with your physician before using.