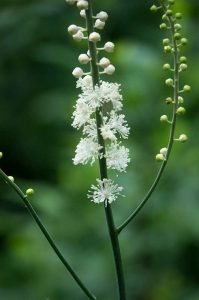 Black Cohosh is commonly called by other names such as snakeroot, black snakeroot, fairy candle, black bugbane, rattleweed and rheumatism weed.  Black Cohosh is a member of the buttercup family and grows in various places including North America. The Native Americans used Black Cohosh for many medicinal purposes.  These treatments include but are not limited to snakebites, sore throats, fever, cough, kidney problems and depression. In addition, Native Americans used black cohosh as a ceremonial herb to bring clarity. Some early American settlers thought the root of Black Cohosh to be the main ingredient in witches’ brew and any female caught with it in her possession was deemed a witch and burned!  As settlers became more familiar with this medicinal plant, they began using it quite frequently to treat various conditions such as rheumatism, and absence of or painful and heavy menstrual cycles.

Extracts from this plant are thought to contain analgesic and anti-inflammatory properties and can act as a sedative.  Currently, people use Black Cohosh as a dietary supplement for menopausal symptoms, including hot flashes (also called hot flushes), night sweats, vaginal dryness, heart palpitations, tinnitus, vertigo, sleep disturbances, nervousness, and irritability.  The herb has also been widely used in Europe for more than 40 years and is approved in Germany for premenstrual discomfort, painful menstruation, and menopausal symptoms.

The National Center for Complementary and Integrative Health is researching Black Cohosh and how it affects the body. Recent research pointed out an interesting study. Some over the counter Black Cohosh products have been found to contain the wrong herb or to contain mixtures of Black Cohosh and other herbs that are not listed on the label.  More specifically, Black Cohosh is sometimes confused with Blue Cohosh (Caulophyllum thalictroides), which has different effects and may not be safe for some individuals.

Black Cohosh has been used for generations and will continue to be used for the above-mentioned symptoms.  As always, it is recommended to check with your health care provider about combining herbs with your medications as an effective way to manage your health. This will ensure coordinated and safe care in all treatments.