The Good Fortune of Tea 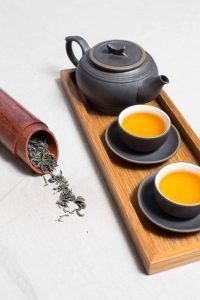 Tea is made from the leaves of the tea plant Camellia sinensis. There are many different varieties of tea including green tea, black tea, oolong tea, yellow tea and white tea. The Yunnan Province in China is said to be the birthplace of tea and the home to the world’s oldest, cultivated tea tree at over 3,200 years old.  China is considered to have the earliest notated records of tea consumption dating back to the 10th century BC.

All tea comes from the same plant Camellia sinensis, but the leaves are processed differently.  Green tea leaves are not fermented, they are withered and steamed.  Black tea and oolong tea leaves undergo a crushing and fermenting process. Tea contains a type of antioxidant called catechins. Catechins are found highest in concentration in white and green teas while black tea has fewer catechins due to its oxidative preparation.  Research by the U.S. Department of Agriculture has suggested that levels of antioxidants in green and black tea do not differ as much as previously thought and are almost similar. Flavor can be added to tea during its processing to enrich the tea.  Among the best known are Chinese Jasmine tea with jasmine oil or flowers added to it; Earl Grey tea with the oil of bergamot and the popular Indian Masala chai which has spices added to it as well.

Dry tea has more caffeine by weight than coffee; however more dried coffee is used than dry tea in preparing the beverage, which means that a cup of brewed tea contains significantly less caffeine than a cup of coffee of the same size. Currently, coffee is more popular than tea in the United States, but a cup of black tea is rapidly gaining popularity. Starbucks has gained success by adding tea to its menu.  Iced tea is consumed throughout the United States during the summer and in the south, sweet tea (tea sweetened with large amounts of sugar or artificial sweetener and then chilled) is also quite popular.

Tea had made its roots in United States history with the Boston Tea Party, an act of protest by American colonists against the British Government. They destroyed many crates of tea from the British East India Company shipped into Boston Harbor. This incident, as we know, sparked the American Revolution.

Tea has long been used as a medicinal plant. Some tea experts say that the antioxidants found in green and black tea are 10 times that of fruits and vegetables.   The valuable effects of tea consumption in the prevention of cancer and cardiovascular diseases have also been demonstrated in animal models.  Tea plays an important role in improving the beneficial intestinal flora and protecting cell membranes from oxidative damage, and in the prevention of coronary heart disease and diabetes as well. Tea also prevents dental cavities, normalizes blood pressure, promotes weight loss and is effective against certain pathogenic bacteria. Both green and black tea contains a number of antioxidants that may have anti-tumor properties.

So today, one might take a break in the afternoon and enjoy a cup of freshly brewed tea and recognize its many benefits.