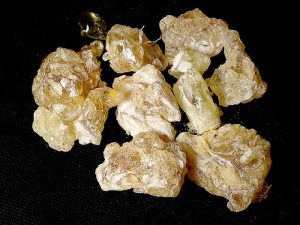 Frankincense has a sweet, warm aroma that is stimulating and elevating to the mind and body.  It’s comforting properties have been used to help focus the mind and overcome stress and anxiety.   Frankincense is used in many Christian churches including the Eastern Orthodox, Oriental Orthodox and the Catholic church.  According to the gospel of Matthew 2:11, gold, frankincense, and myrrh were among the gifts to Jesus by the biblical magi “from out of the East.” The Judaic, Christian and Islamic faiths have all used frankincense mixed with oils to anoint newborn infants and for members entering into new phases of their spiritual lives.

Frankincense is produced by slashing the bark of a tree, called striping, and allowing sap to slowly ooze from the cut tree, drip down and form tear-shaped droplets that are left to harden on the side of the tree.  These beads will be then collected two to three weeks later.  There are several species and varieties of frankincense trees, each producing a slightly different type of resin.  Differences in soil and climate create even more diversity of the resin.  The more opaque the resin, the better the quality.  Recent studies have indicated that frankincense tree populations are declining, partly due to the over harvesting of the resin, burning of the trees and attacks on the trees by insects.

Frankincense is used in aromatherapy and perfumes. In a time before daily bathing, people would use the sweet smoke from the frankincense to make themselves smell better. Frankincense was also used in cosmetics and some skin care products for aging and dry skin.  Women utilized the ash of frankincense for personal appearance mixing it and applying as eye shadow.  Frankincense resin is edible and is used in traditional medicines in Asia for digestion and to help with digestive ailments.  For internal consumption, it is recommended that frankincense be translucent, with no black or brown impurities.  It is often chewed like gum.

During this holiday season, when we see or smell the sweet aroma of frankincense, let us remember its long history and some of the therapeutic aspects of this well-known medicinal plant.