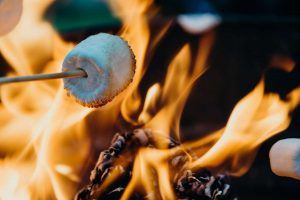 At some point in your life, you probably have sat around a campfire and roasted marshmallows or made S’mores.  Perhaps you tasted marshmallows in a cup of hot chocolate in front of the fireplace on a cold day.  This simple, sticky treat is typically thought of as an empty-calorie snack, but marshmallow root, from which marshmallows are made, is actually very healthy for you.

Marshmallow comes from the root of the marshmallow plant.  It is one of the most valuable medicinal plants for treating the gastrointestinal, respiratory and urinary tract systems. Its scientific name is Althaea officinalis.  Common names for marshmallow include white mallow, common marshmallow, mallow, sweet weed, and mallards. The plant is native to Europe and western Asia. It can be seen growing in the northeastern part of the United States as well as the Great Plains including Nebraska and North Dakota.

Since Ancient times, Althaea officinalis was used for many medicinal ailments.  In the Renaissance period, Marshmallow was used for toothaches, stomach problems and coughs. It was also thought to have magical properties and those that burned it as incense could acquire special powers.

The roots of the marshmallow plant produce a thick mucilage or slimy liquid.  This slimy liquid has medicinal benefits. It protects mucous membranes directly in the digestive tract, urinary tract and upper respiratory tract.

In the urinary system, marshmallow has been used to soothe pain in the bladder and treat urinary tract infections, cystitis, kidney stones and decrease water retention.

Marshmallow can also be used to treat inflammation of the upper respiratory system as it can soothe irritated airways and calm an irritated dry cough.  In addition, research shows that marshmallow can act as an antitussive and a bronchodilator.  It reduces congestion and soothes a sore throat.  It has been used to treat tonsillitis, bronchitis and asthma.

So the next time you enjoy your hot chocolate with marshmallows on top or roast marshmallows by a campfire, remember this yummy treat may actually be good for you.