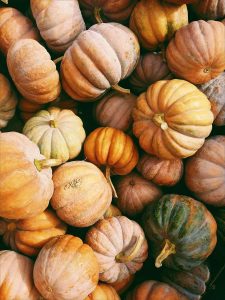 Fall is here!! After a long, hot summer, the mildly warm days and cool nights are a welcome to most people.  In addition, autumn offers some of the most beautiful changes in our environment. The brilliant colors of red, yellow and brown, touch the landscape and make us realize that winter is approaching soon.  During the fall, we see the migration of birds as they head south for the winter.  Another feature of the season is the appearance of pumpkins and in the fall, a person can see pumpkins everywhere!   Pumpkins are being used for decoration, being carved for Halloween or intregrated into cozy, comfort food recipes.

References to pumpkins date back many centuries.  Literature has mentioned the pumpkin in such classics as “The Legend of Sleepy Hollow”, “Peter, Peter, Pumpkin Eater” and “Cinderella”.  Many cultures have used the pumpkin, including the Native Americans whom roasted long strips of pumpkin on the open fire and ate them.  Colonial Americans did not celebrate Halloween or have carved Jack-o-lanterns.  They had varieties of pumpkins such as orange, yellow, and green, far more than we see today, all, which were consumed as food.  The origin of pumpkin pie occurred when the colonists sliced off the pumpkin top, removed the seeds, and filled the pumpkin with milk, honey and many spices; thus, the pumpkin pie was born!

Pumpkins, from the genus Cucurbita, are often thought of as a vegetable. Pumpkins are actually fruits.  Throughout history there is notation of what the pumpkin can be used for medicinally. Canned pumpkin has been recommended by veterinarians as a dietary supplement for dogs and cats whom might be experiencing digestive ailments, including constipation, diarrhea or hairballs. Human consumption of pumpkin has a variety of uses including the treatment of intestinal parasites, bladder irritation and kidney infections.  The most heavily researched area of pumpkin’s medicinal benefits has its seed being used along with Saw Palmetto for BPH, benign prostatic hyperplasia.  Other documentation has pumpkin being utilized for antibiotics, as a hypoglycemic agent, anti-inflammatory agent, to lower blood pressure and cholesterol, and as an anxiety agent.

As you enjoy fall and the many celebrations that come with this time of the year, enjoy the pleasure of eating pumpkin as well.