The Versatility of Aloe Vera 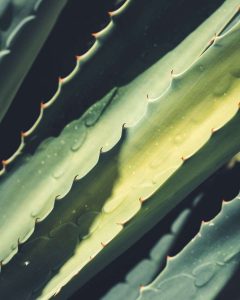 Aloe Vera or the plant’s Latin name Aloe barbadensis miller is a common medicinal plant.  Most everyone has heard or used aloe or Aloe Vera gel. Over the counter, you can find Aloe Vera in everything from cosmetics to medicines.

The history of Aloe Vera dates back centuries with it being used for its health, beauty, medicinal and skin care properties. The Greeks regarded Aloe Vera as the universal panacea. The Egyptians called Aloe “the plant of immortality”. The Aloe Vera plant was so important in Egyptian culture that drawings of it are thought to be on the temple walls of the pyramids.  Egyptian queens, such as Cleopatra, may have used it as part of their regular beauty regimes to keep their skin looking young and soft.  Alexander the Great, and Christopher Columbus used it to treat soldiers’ wounds.  It was used to treat everything from boils, ulcerated skin, bruising and open bleeding wounds.  Native Americans used Aloe Vera for its rejuvenating powers.  Other countries including India, China, Mexico, Japan, Persia and Tibet had also recognized the benefits of this medicinal plant.   Folklore has this plant being used to protect people and people’s homes from evil spirits and evil spells that might be cast upon them.  For centuries, aloe has been a part of such folklore but today, it plays an important role in the economy; as a part of the medicinal and cosmetic industry. Currently, Aloe Vera is a multi-billion dollar business worldwide.

Aloe Vera is widely used today in food as a natural flavoring, cosmetics, food supplements and herbal remedies.  The Aloe Vera plant is succulent and many uses are made from the gel that is obtained from this plant’s leaves.  Medicinally, Aloe Vera has been used to treat countless conditions including those found in the gastrointestinal system including constipation, gastritis, irritable bowel syndrome, and peptic ulcers.  Commission E (Germany’s regulatory board for medicinal plants) approved the use of Aloe Vera for the treatment of constipation.  For skin conditions such as wounds including ulcers, burns and leg ulcers, diabetic foot ulcers, psoriasis, eczema, anal fissures and dermatitis, Aloe Vera has proven to be effective.

Aloe Vera can also be used for the treatment of teeth and gum health.  A study published in General Dentistry reported that Aloe Vera was as effective as toothpaste in fighting cavities.   Anyone who has ever had sunburn or any topical burn knows the effectiveness of using aloe topically to take care of the skin and ease the pain associated with the burn.  In the Journal of Pakistan Medical Association, a team of plastic surgeons found the effectiveness of using Aloe Vera gel in the treatment of second degree burns.  Other therapeutic benefits of aloe mentioned in the literature include using it for its antimicrobial properties, applying to damaged skin after radiation treatments, improving memory and learning and reducing depression.

While Aloe Vera may be the universal panacea. It is always advisable to check with your health care provider before using any medicinal plant.