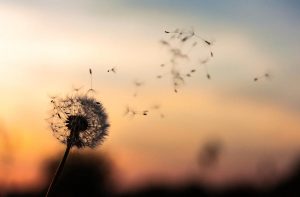 I think everyone knows the troublesome causing weed – dandelion or taraxacum officinalis. It is a common place to most yards at this time of the year. Dandelion appears in the spring and can remain until the fall. It can make the most beautiful lawns damaged in their appearance with this unsightly visitor. But what most do not know is that the dandelion has many medicinal plant benefits. It has a long and vibrant history. The first mention of the Dandelion as a medicine was in the tenth and eleventh centuries by Persian physicians Razi and Avicenna. The leaves are shiny and the margins of each leaf are cut into great jagged teeth, either upright or pointing somewhat backwards, and these teeth are what give the dandelion its name of resembling the teeth of a lion. Also well known to this plant is upon picking the flowers, a milky juice exudes from the broken edges of the stem, and turns to a brown stain on the hand. The dandelion furnishes considerable quantities of pollen and nectar to the bees, flies and other insects. The dandelion is also furnishes food to pigs, horses, goats and birds. Humans have consumed dandelion leaves in salads, soups and on top of sandwiches. Dandelion tea is a popular beverage. The dried dandelion leaves can be used as a digestive or diet drinks and in herbal beers. The dandelion flowers are used in the preparation of a beverage known as Dandelion Wine. The roots of the dandelion have been used to make dandelion coffee.

Taraxacum officinal or dandelion is a bitter and its properties are astringent. Medicinal properties include being used as a diuretic and tonic. Dandelion contains substantial levels of vitamins A, C, D, B-complex, iron, magnesium, zinc, potassium, manganese, choline, calcium and boron. Of all the greens available, dandelion leaves contain the highest content of vitamin A. It is a general stimulant to the overall system, but especially to the urinary organs, and is used in kidney and liver disorders. It is useful for liver complaints and has the doctrine of signatures of the liver, because of its bright yellow flowers of a bilious hue. It is added to many liver and gallbladder support formulas. It has been used as a laxative for mild constipation. It has also been used for increasing the appetite and promoting digestion. There is some support in the literature using this plant topically on to rid the body of warts.

So as you a pulling this unwanted visitor out of your yard this summer also remember that this is used by animals for food and has many medicinal benefits.