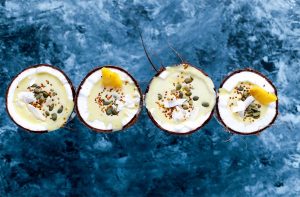 Monolaurin is a powerful agent that has been in the spotlight lately. Monolaurin is being touted as helping a wide variety of ailments. What exactly is monolaurin? What does it effectively fight against?

To understand monolaurin we need to first step back and review our food chemistry. Fatty acids called Medium Chain Fatty Acids or Medium Chain Triglycerides are lipids that have been shown to inhibit certain viruses. One of most potent antimicrobial and antiviral lipids has been found in coconut oil and is called lauric acid. Coconut oil contains about 40 to 55 percent lauric acid. Lauric acid is the main saturated fatty acid found in coconut fat and a biochemical derivative of lauric acid is called monolaurin.

So why not drink coconut milk versus taking a supplement with monolaurin? Lauric acid is not as strong as monolaurin. When ingesting coconut oil, only a small percentage of the lauric acid will be transformed by the body into the powerful monolauric acid.

The lauric acid in coconut oil is used by the body to make the same disease-fighting monolaurin that babies make from the lauric acid they get from their mothers’ milk. The monolaurin is the substance from the breast milk keeps infants from infections. Lauric acid was originally discovered when microbiologists studied human breast milk to determine the antiviral substances that protected infants from microbial infections. Lauric acid has been shown to protect newborns, whose immune systems are underdeveloped, from viruses such as Respiratory Syncytial Virus (RSV).

How does monolaurin work? Monolaurin works by binding to the lipid-protein envelope of the virus, thereby preventing it from attaching and entering host cells, preventing infection and replication. Monolaurin also destroys the viral envelope, killing the virus.

Monolaurin is not the type of nutritional supplement you have to take on a daily basis but only when the need arises. If start to see the early signs of the flu, like sniffles, monolaurin may be first start. Antibiotics can kill unwanted micro-organisms, but they also may kill many friendly micro-organisms.  Monolaurin, on the other hand, does not appear to have adverse effect digestive bacteria, but rather only on unwanted microorganisms. Plus, monolaurin can reduce the resistance of germs to antibiotics. Monolaurin is safe. Monolaurin maybe safer than many other food supplements that are designed to boost the immune system. One of the safest substances known to man is breast milk. However, with any supplement it is always best to check with your doctor before taking anything.