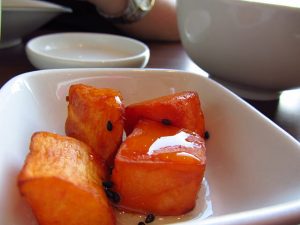 Vitamin A in considered an essential nutrient for the human body. Vitamin A has several different forms. The major form or active form of vitamin A is retinol. Retinol is a yellow, fat-soluble vitamin. Vitamin A is often in expressed in international units or IU. Vitamin A can be found in many different foods but located mainly in colorful fruits and vegetables. Some of the foods that include vitamin A are sweet potatoes, yams, carrots, broccoli, kale, milk, spinach, pink grapefruit, pumpkin, collard greens, eggs, papaya, cantaloupes, mango, peas, winter squash, liver or beets. Vitamin A plays an important role in many of the functions in our body. It is involved in vision, bone growth, reproduction, immune system, cell division and differentiation, teeth and the skeletal system. Vitamin A plays an important role in the linings of the eyes and respiratory and urinary tracts. A person with vitamin A deficiency will predominantly show up with vision problems. Vitamin A deficiency is rarely seen in the United States and is more common in developing countries. A common visual impairment of vitamin A deficiency includes night blindness. In ancient Egypt, the cure for night blindness was to eat liver which is an abundant source of vitamin A. Persistent vitamin A deficiency can lead to total blindness. Other areas of vitamin A deficiencies include dry eyes, impaired immunity (vitamin A is needed to create white blood cells), hyperkeratosis, and problems in the epithelium lining of the respiratory, intestinal and urinary systems. Zinc and iron deficiency can often accompany vitamin A deficiency.

Those at risk for developing vitamin A deficiency are as follows:

Current medical research is examining vitamin A and its role in disease prevention with lung and breast cancer and diseases of the skin.

“One recent study found that applying topical vitamin A to the skin may improve the appearance of wrinkles associated with aging as well as promote the production of skin-building compounds. Another study found that children who take vitamin A supplements may receive a boost to their immune systems that is helpful prior to receiving vaccines such as tetanus.”